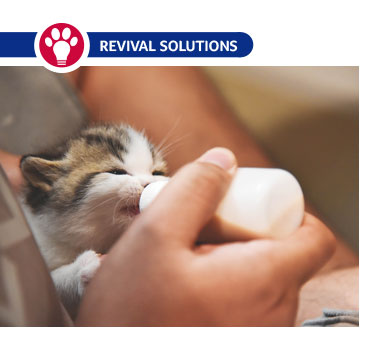 Bottle feeding kittens and puppies should be carried out as mom would care for her babies but sometimes it is not as easy as it sounds. The first time can be stressful as you try to determine how much and how often to feed, how to make them urinate and defecate and how to keep them clean.

To avoid disease transmission, anyone who handles newborn puppies or kittens must wash their hands before touching them, especially if they have handled other animals. Also, all bottles and feeding equipment should be well-cleaned and sanitized.

How Much Should I Bottle Feed My Newborn Puppy or Kitten?

The important thing is to not overfeed newborn puppies or kittens! It is better to feed less and more often than to run the risk of diarrhea or sudden death. Feed until the tummy starts to distend. The stomach which is located just under the ribs, should feel full but not stretched.

Diarrhea can also be caused by overfeeding. Loose stools caused by mild overfeeding are yellow in color. Use electrolytes for one or two feedings and when stools become firm again, go back to feeding the formula full strength but feed 10 percent less.

Sudden death from overfeeding carbohydrates (CHO) in replacers has also taken a lot of babies in the past and is the reason I do not recommend making your own replacer if feeding longer than 24 hours! The high CHO stimulates clostridium overgrowth and quickly kills the nursing baby who has little immunity to fight it. Mom's milk is 10 percent fat and is where the calories should be to avoid clostridium overgrowth! Quality commercial replacers have calories in fat to avoid sudden death issue. Under feeding slightly also helps prevent the issue. Better to feed one more feeding per day than lose the baby to clostridium (over eating disease).

Babies should be fed until their stomach, behind last rib, is slightly distended. If the baby cries before the two hour feeding and has an empty tummy, feed again and increase the amount slightly. Underfeeding issues are just as serious as overfeeding issues. Puppies and kittens that are underfed cry all the time, become lethargic and virtually listless, have little to no weight gain and become chilled. They dehydrate quickly and die if action is not taken.

What Temp Should Milk Replacer for Puppies Be?

The puppy or kitten formula should be warmed first to 100º (barely warm, not hot). Always check the temperature on the back of your wrist before feeding. If you use a microwave, it is best to microwave a cup of water to very warm and drop the bottle in it. Microwaving the bottle of formula directly can change proteins and cause issues of hot spots in milk. After warming, be sure to mix and test on wrist after heating to avoid hot liquid layers burning a baby's delicate tissue.

Colic in Puppies and Kittens

Always feed puppies and kittens upright on the sternum. Never hold a puppy or kitten on its back when nursing. Also keep them warm between feedings for proper digestion. After feeding, you will need to burp them to avoid issues with colic. Moms will lick them in circles causing them to belch. You will need to thump them with a finger, keeping their head up, to help them get rid of gas bubbles. If they spit up after feeding, back off on the volume for the next feeding.

Colic can also be caused when the formula we are feeding does not agree with them. If puppies and kittens are uncomfortable and cry a lot after feedings, they are most likely sensitive to the milk replacer. This can happen to one or two babies in the litter or the whole litter. If you are using a milk replacer with a cow milk base, switch to using one with a goat milk base, such as Breeder's Edge Foster Care GM, to correct this issue.

Should Newborn Puppies Poop After Ever Feed?

After each meal, stimulate your puppies or kittens to urinate and defecate. Mom accomplishes this when she licks them. They do not go on their own so you must replace mom's stimulation. Use a cotton swab or cotton ball dampened with warm water on tiny babies and a soft paper towel for larger babies. Gently rub genital or anal area of the baby until they pass stool and urinate. Stools should be light brown in color. Wipe them clean with a warm moist wash cloth. Use a warm, damp wash cloth to bathe the baby all over, head to tail, twice a week. It feels good to them, gets them stimulated and prevents skin issues.

Diarrhea in Puppies and Kittens

Diarrhea that looks like the milk being fed often happens about seven to ten days after starting puppies and kittens on a bottle. The cause is lack of bacteria to help with digestion. Mom normally gives them bacteria when cleaning. Since we took on mom's role, we must add probiotic to give them the bacteria they need. Give a probiotic three times the first day and then, after the diarrhea has slowed, feed probiotics once a day. Be sure to use a probiotic that bypasses the stomach, or you will be disappointed with the results. I recommend using Doc Roy's GI Synbiotics Gel or D.E.S. Health-Gard Liquid.

Mom gives newborns colostrum during the first 24 to 72 hours of life. Colostrum passes along mom's antibodies to her babies to help protect them from disease. Colostrum replacements are badly misunderstood as they do not replace mom's antibodies. Colostrum substitutes are made from cow colostrum not dog or cat colostrum. Breeder's Edge® Nurture Mate contains centrifuged cow colostrum and proteins common to cats and dogs. Given daily to bottle babies for the first two weeks it will bind any virus or bacteria and carry it out of the system eliminating the threat. It is a way to manage the colostrum deprived baby effectively to weaning.

Puppies who are 25 percent smaller than litter mates have issues 50 percent of the time in the first week. Using Nurture Mate to help the tiny puppy or kitten get through the first two weeks on mom can save them. Nurture Mate given daily to a baby who is sick gives the same boost to the newborn's immune function.

Bottle feeding issues in puppies and kittens can be avoided if you know what to watch for and correct issues quickly. You will know you are doing a good job if your babies feel firm, are content and continue to gain weight.