Neosporum or neospora caninum in dogs is a coccidian parasite causing the infection called neosporosis. This one-celled parasite is most commonly seen in dogs and cattle and causes damage to the muscles and nervous system. It is similar to toxoplasmosis, the disease feared by pregnant women handling cat litter.

Causes of Neosporum in Dogs

Neospora in dogs can be contracted by drinking infected water, eating infected raw meat, or placentas from livestock. Mother dogs can transmit the parasite to their pups through the placenta or through the milk. This is one of the reasons we discourage feeding raw meat diets to females in breeding programs. Even if you are not currently feeding a raw meat diet, your dams can harbor the parasite. Then, pregnancy can initiate parasite multiplication, followed by transmission thought the placenta and into the fetus. Adults may have the parasite but not have symptoms.

Life Cycle of Neospora in Dogs 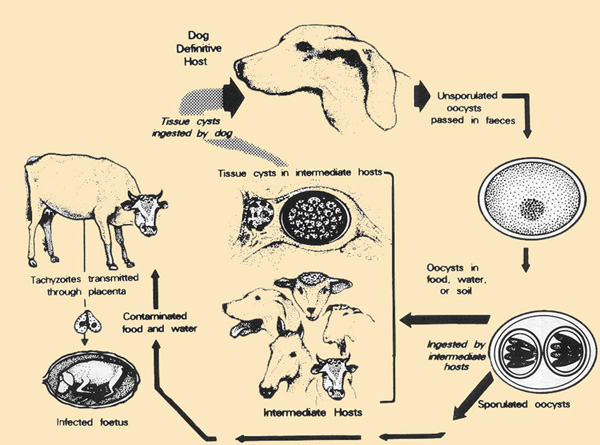 How Do I Know if My Dog has Neospora?

To diagnose neosporosis in dogs, blood work at your veterinary clinic (CBC and chemistry panel) will not have specific changes, in other words, typical bloodwork won’t show this parasite. A PCR assay or titer or test specifically looking for the antibodies of the neosporum parasite is most helpful. However, it can take over three weeks to get the results. The most effective way to test is to run two samples three weeks apart to compare results, looking for a rise in the antibody test indicating recent active infection. When checking for chronic disease, an indirect fluorescent antibody test (IFAT) is the test of choice. Antibody tests can be used to differentiate toxoplasmosis from neosporosis. Fecal tests are not generally useful as the eggs are not typically shed in the stools.

Imaging such as X-rays and MRI do not yield specific findings. Tissue samples are also not definitive. Rarely a CSF (Cerebrospinal fluid tap) is diagnostic.

Neosporosis in Dogs Treatment and Prevention

Neosporosis treatment in dogs consists of using two antibiotics, clindamycin combined with trimethoprim/sulfonamide for four to eight weeks. Treatment is most effective if started early, even if neosporum is suspected but while waiting for test results to return. Waiting until muscle contracture occurs may make treatment unsuccessful. Other treatments may consist of pyrimethamine and ponazuril (an extra-label drug use). Avoid the use of any immunosuppressive drugs.

If one puppy is diagnosed with the parasite, other litter mates should be tested and/or treated as well. The prognosis is poor to guarded.

Prevention is best achieved by avoiding feeding raw or undercooked meat, avoiding contact with placentas on farms, and removing feces. There has not been any indication of human disease.

Toxoplasmosis (Toxo) infection is a parasite infection often found in cats. Learn the symptoms, diagnosis, treatment and prevention of Toxoplasmosis in cats.

Coccidia in Dogs and Cats

After first exposure, Coccidian parasites can remain present in your cat or dog's intestines to take advantage of any digestive upset. Learn how to treat Coccidia.

Diarrhea in newborn puppies or kittens isn't always normal and can cause concern. Learn the possible causes of diarrhea in puppies and kittens and treatments.