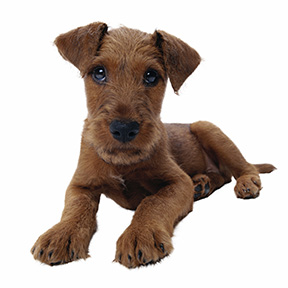 A male breeding dog is called a stud dog. There are multiple factors that go into stud dog selection—selecting for fertility, ease of breeding, litter size and the ability to correct a weakness we see in our females. We select new genetics because of confirmation, size, and the ability to reproduce the traits in offspring. Much time goes into looking at parents and siblings as stud dogs are selected and purchased as puppies. We keep our own females as we can raise better females with known maternal traits for whelping, litter size, and ease of handling than we can buy. Replacement females will be selected out of these stud dogs, so select well. Remember, management should not stop after the purchase.

Once selected, take your stud dog prospect to a veterinarian for a health exam. Your veterinarian should make sure he has two testicles, both testicles are down, and that the prepuce and penis are normal. The veterinarian should also assess the knees, hips, heart, bite and general health. There is rarely a perfect puppy, and we need to know where the weakness is to decide if we will keep him.

Once home, isolate for three weeks and treat for internal and external parasites, give a booster vaccination, and make sure he is staying healthy. After the three week isolation, we can raise with appropriate sized puppies. Do not select a roommate that is dominant as we want this guy to be dominant and an aggressive breeder. Never grow a stud dog prospect with a retired female. Grandma will box his ears every time he acts like a teenage boy and suppress breeding behavior. Breeding is a learned trait, and we want to set this guy up for success.

We recommend giving Doc Roy's® Daily Care vitamins to replacements we are growing for breeding, male or female. Daily Care is made in the USA and ensures optimum growth. The goal is to raise replacements that mature physically by one and one half years of age. Their diet should be the one you raise your puppies on as you are feeding the best food you can get.

By five months of age, it is good to house a stud dog by himself or with another male his age, but definitely not with another female. They can breed but we do not want a female pregnant before she is mature. Allowing him to see breeding behavior is good, but be cautious with housing next to an older male who will intimidate him through the fence. They still have “pack mentality,” and only the most dominant male breeds. An intimidated male will not mount or breed in the other male's presence, and we do not want to see that behavior in a young stud dog.

What Age Can Male Dogs Breed

If you're wondering when can a male dog start breeding, new stud dogs can see limited use when one year of age. By one and one half years of age, we can use as we do our adult males, if they have grown well. Mature males can be bred once a day without lowering sperm count significantly. Four females to one male is easily managed; breeders manage six females to one male if breeding is controlled. This allows the best genetics in our puppies. Breeding females every other day will allow us to settle females in standing heat and keep male sperm count high.

Occasionally a young male's sperm count is low for no good reason. You can raise the sperm count effectively with            Breeder's Edge® Oxy Stud™ vitamins for males. L-Carnitine, vitamin D and zinc, as well as many minor minerals and vitamins, are needed for sperm production. Oxy Stud™ packages these vitamins in either a meat treat or a meat flavored soft chew. Giving Oxy Stud™ once daily has been effective with raising sperm count in sub-fertile males in 60 days. Additional supplements for stud dogs include Breeder's Edge® Problem Male™, and Breeder's Edge® Get Him Going™. Each are formulated for the unique needs of a breeding dog and enhances male reproductive performance.

We purchase replacement genetics in an effort to raise the perfect puppy. We never get to perfect but that is what keeps us trying! Stud dog selection is part of that effort, but you must raise your replacements effectively. You purchased him for his genetics; let's raise him to become the stud we purchased!