Giardia in Dogs and Cats

What is Giardia in Dogs and Cats?

Giardia in dogs and cats is a microscopic one-celled flagellated protozoan parasite that lives in the intestinal tract of many mammals. Giardiasis is what the infection with giardia is called. It is considered the most common intestinal parasite in dogs and cats, with a prevalence of 5 to 15% of dogs and cats infected (study of 16,114 dogs). Up to 30% of shelter dogs, dogs going to dog parks, in kennels and catteries have had reports of giardia cysts diagnosed.

Symptoms of Giardiasis in Dogs and Cats

Many infected dogs and cats, particularly adults, may be asymptomatic. Infections are more common and more serious in puppies and kittens compared to adults. Additionally, co-infections with other parasites, viruses and bacteria cause more severe symptoms. However, if infected, sudden onset of diarrhea with large volumes of watery pale, mucousy diarrhea is the most common symptom. Rarely a sick dog or cat will have fever or vomiting. With severe diarrhea, some dogs or cats will become dehydrated, lose body weight, become lethargic and have abdominal discomfort.

How Does Giardia Spread?

Giardial organisms are found in water, soil and contaminated food. Swallowing fecal-contaminated food or water, or self-grooming, can lead to infection, even in small numbers. Overcrowding and unsanitary conditions increase the risk of infection. There are two forms – trophozoites and cysts. The cysts can persist for months in the environment.

Humans can also become infected. Contaminated water sources, such as drinking from streams or other untreated water sources, are the most common source of human infection. Good personal hygiene of hand-washing before and after using the toilet, handling or consuming food and drinks, and avoiding undercooked foods are essential. The appearance of giardia microscopically is the same in most mammals. Most of the time, dogs and cats don’t become infected with the same genotype of giardia as humans, but some cross infections have been reported rarely. Any infected animal should be considered a potential infection source to humans. Children and immunocompromised individuals should take greater precautions. Additionally, infected people should practice hand-washing hygiene after using the toilet and before feeding, watering, and handling animals.

Treatment of Giardia in Dogs and Cats

Currently, there is no FDA approved drug to treat giardia in dogs or cats.

Eliminating all of the giardia organisms from an individual animal or kennel/cattery is unlikely to occur. Many dogs and cats are suspected to have giardia as part of their normal gut flora. Managing clinical signs of diarrhea should be the goal of treatment.

Follow up testing to evaluate for either the cysts seen microscopically or a negative ELISA test is unlikely to be a realistic goal.

Remember to treat the dog or cat, not the test results. Recent treatment and lifestyle should be considered when developing a treatment plan. Unless a negative result on both microscopic evaluation and ELISA testing is required, as in the cases where a sub-clinically affected dog or cat lives in a home with immunocompromised people with high zoonotic risks, only treat if the dog or cat has clinical signs of abnormally soft stools or similar signs. The Companion Animal Parasite Council (CAPC) Board says: “Insufficient evidence is available for definitive recommendations in each clinical scenario; however, the majority opinion of the CAPC Board is that asymptomatic dogs may not require treatment.”

Metronidazole: Metronidazole for dogs and cats is the most commonly used extra-label drug used to manage giardia in the United States. Metronidazole is NOT safe during pregnancy.

Combined Febenatel, pyrantel pamoate, and praziquantel (Drontal Plus): is effective in treating giardia in dogs when administered daily for three days using the dose bands indicated on the Drontal Plus label.

Secnidazole: There is buzz about using Secnidazole in small animals for giardia. There is no consistent published dose. The primary advantage is that a single dose may eliminate cysts shed in the feces. However, it has side effects that may include toxicity, nausea, elevated liver enzymes, and must be compounded as there is no veterinary formulation available. At this time, there is no universal recommendation showing safe use or superior outcomes compared to the drugs listed above.

There is no current giardia vaccine available for use in dogs and cats in the United States.

How to Treat Giardia in Dogs and Cats

Supportive Care: Fluid therapy, oral electrolyte therapy such as Breeder’s Edge Puppy or Kitten Lyte, and additional treatment of symptoms with products such as Kaolin-Pectin will improve clinical response and shorten the course of the disease.

Giardia Prevention in Dogs and Cats

Bathing treated dogs and cats with Vet Basics Chlor 4 Shampoo on the last day of treatment and before placing pets in their new homes can eliminate fecal debris and associated giardia cysts.

In kennels and catteries with known or suspected giardia, treating dogs and cats with five days of fenbendazole, for the last five days prior to placing or shipping to new homes may reduce the likelihood of new owners being told by their veterinarian they were sold a pet with a positive ELISA test result.

Giardia testing in dogs and cats may be done one to two days after the completion of therapy if the dog or cat still has abnormal stools. The recommended test to perform is a fecal flotation with centrifugation to detect cysts in solid or semisolid stools. ELISA tests may remain positive even after treatment for variable periods of time (one week to two months) and should not be used as a guide to determine reinfection or failure of treatment.

Reinfection of giardia in contaminated environments is common. Apparent treatment failures may be due to reinfection, inaccurate drug dosing, drug resistance, or in immunosuppressed or very young puppies or kittens. 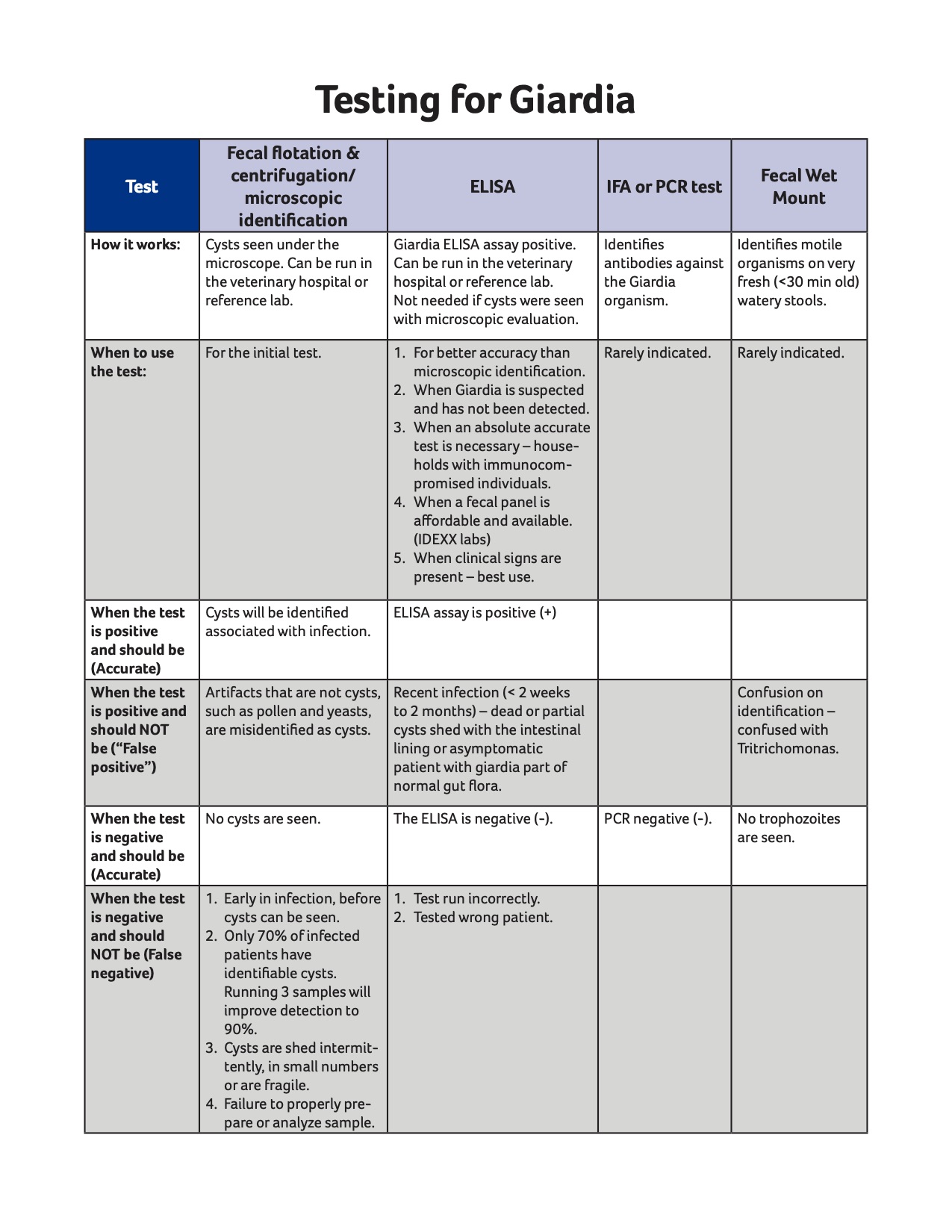 What causes diarrhea in cats and what can you do to stop it? Learn the top causes of kitten diarrhea and discover the best ways to treat it.

Marty Greer, DVM's Bio
The materials, information and answers provided through this website are not intended to replace the medical advice or services of your personal veterinarian or other pet health care professional. Consult your own veterinarian for answers to specific medical questions, including diagnosis, treatment, therapy or medical attention.