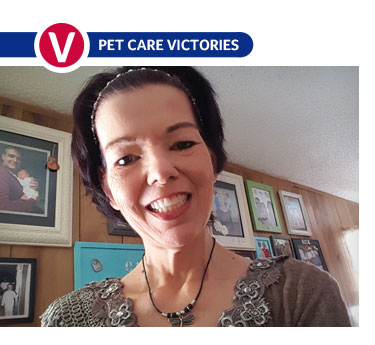 “My dogs and I had recently moved and I originally thought the problem had something to do with that,” says licensed breeder, Deirdre.

For nine years, Deirdre has been breeding Chihuahuas. But in 2015, she experienced something she never had before. “My two females went into heat in the spring, but I had decided to let them skip a heat at that time and breed them again in the fall. But in the fall, they didn't go back into heat and seemed a big sluggish. I wasn't sure what was going on,” she recalls.

In November, Deirdre called Deedee, a Revival Pet Care Pro and explained the situation. “When she called and told me what she was facing, I felt sure it was a simple vitamin issue we could fix. We face this issue every day. People aren't aware there is a problem with a vitamin deficiency because the every-day house dog is who dog food companies make food for. I explained to her that dogs you want to breed need more,” says Deedee.

Deedee suggested Deirdre give her dogs Doc Roy's® B Strong, a vitamin and mineral supplement. “I had her double dose with B Strong for four to six weeks before they were due to come into heat. This would first correct the deficiency, then build what was needed for breeding health. A few weeks later she called to tell me her dogs were pregnant and how happy she was!” Deedee says. “It benefitted them tremendously. It helped give them a boost and they both went into heat within a couple of weeks. I'm so convinced it was the B Strong,” Deirdre says.

Soon after both dogs became pregnant, Deirdre again turned to Deedee for advice. “I was so excited when I found out both dogs were pregnant that I called Deedee right away. She helped me then develop a vitamin and supplement schedule so this never happens again. In addition to B Strong, she suggested prenatal vitamins for moms, regular vitamins for my males and calcium gel when whelping begins,” Deirdre says. “She should not have problems with her heat cycles again,” Deedee says.

Irregular heat cycles are frustrating, but Deirdre says with help from a knowledgeable source, they can be fixed. “Don't just look online for a solution. You don't want to accidentally end up giving your dogs something that might hurt them. Call someone you trust who knows and specializes in what they sell. Call Revival!” Deirdre says.

You strive to raise healthy and happy pets. You love the feeling of holding that newborn puppy and seeing the joy a new pet brings to a child's face. At Revival we want to celebrate these wins because we understand that keeping pets healthy comes with challenges.

In our series, Pet Care Victories, we are highlighting YOU and your pet care wins! We know that even the best of us sometimes struggle with the health of our animals. And while at that time it can feel frustrating and devastating, it's important to remember you are not alone. When we share our knowledge and passion with each other, we can all be on the winning team.

Love learning about pet health? Get regular pet health tips and money saving offers delivered to your inbox. Sign up for Revival Animal Health emails. We don't spam, we help.