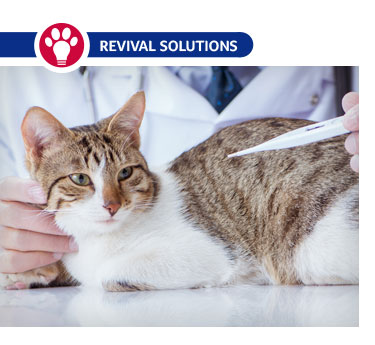 Every species has a weak spot; horses colic, dogs have GI issues and cats have respiratory problems. That is why most feline vaccines protect against viruses that attack this area. Cats are built to live alone in the wild so exposure to viruses from other cats was minimal then. Also, their immune system is different. A European study once tried to let viruses in rescue cats run their course. Over 60 percent of the cats died of pneumonia caused by resident normal bacteria.

The conclusion was that when a cat, and especially a kitten, gets a respiratory virus their immune system attacks that virus and ignores the normal bacteria that they normally keep in check. This allows the normal bacteria to cause infections. You have to use antibiotics in kittens and adults to check these resident bacteria when a cat has an acute respiratory infection. In cats, letting a virus run its course does not work!

Feline Herpesvirus (FHV-1) is also known as Feline Viral Rhinotracheitis. This virus likes to attack the cornea of the eye and the upper respiratory system. In breeding queens, herpes can cause abortions and can be a major issue when introduced into a cattery with low immunity in its queens. Oral ulcers can also occur but they are uncommon. Most oral ulcers are calicivirus caused.

Herpes has an incubation period of two to six days and sometimes even longer. Carriers are common and can intermittently shed the virus throughout their lives. Herpes gets into the trigeminal nerve and it can’t be removed by the immune system.

When a carrier cat is stressed it can start shedding the virus and it can last at least three weeks in discharge. This is a major issue for carrier queens at birth (stress time) because they expose their newborns to herpes. Managing queens involves preventing the transfer of the virus until vaccine immunity is up in the kittens.

The herpes vaccine is solid but once wild herpes is on board herpes is forever. The goal is to get the kittens vaccinated before the maternal antibodies from colostrum run out of protection. If we get immunity up before the wild virus is on board, the carrier state is usually prevented if exposed.

Positive herpes queens can be put on L-Lysine at breeding all through pregnancy and nursing. Kittens from positive queens are replaced ASAP with daughters who are not carriers. Kittens should be weaned on L-Lysine until after the second vaccine is in and effective. Your goal is to get immunity up before the wild virus can establish infection.

Clinical signs resolve in 20 days but the carrier state will develop with flair ups when the cat is stressed.

Calicivirus: Major player in all cats.

Calicivirus in cats causes upper respiratory infections and conjunctivitis with ocular and nasal discharge and lots of sneezing. It can affect other tissues such as bladder and joints but that is uncommon. The incubation period for calicivirus is five days but it can be longer. It sheds for at least 75 days after recovery and some cats can become carriers. The vaccine is solid for all strains and issues go away if vaccine immunity is current.

Bordetella Bronchiseptica: Bacterial issue. Bordetella bronchiseptica is a gram negative bacteria that is now recognized as a primary pathogen in cats. Young kitten bronchopneumonia is an issue and it can be fatal. Bordetella can cause major issues in rescues, especially when the cats are housed together.

In catteries and rescues where Bordetella has been diagnosed, early vaccination is the key to prevention. The treatment cost once the vaccine is initiated is minimal and most pneumonia is prevented.

How Do Cats Get Upper Respiratory Infection?

Upper respiratory infections in cats are contagious. The viruses and bacteria that cause URI are usually transferred from cat to cat or through human transfer. Often called casual transfer, this transfer from people viewing kittens for sale or adoption is a major issue. Be sure vaccines are in before you allow potential owners to handle the kittens. It is all about insurance against viruses to keep them healthy!

In a cattery or rescue, washing hands is the number one way to prevent casual transfer to the next litter. In a rescue setting, wash hands between rooms where cats may have URI.

Treatment for URI in Cats

Once URI or a respiratory disease is identified, treatment should include doxycycline. Doxycycline is the best choice in respiratory issues because it penetrates mucus and has good levels in tears so it can treat eye issues at the same time. Doxycycline also gets Bordetella bacteria, which is becoming an issue in cats. Doxycycline does not stain the teeth enamel as regular tetracyclines do. Adult rescue cats often get normal tetracycline and that is a good economical choice if the patient is not under nine months old.

Use saline/lincomycin nose drops to control surface Bordetella and open the airway so they can breathe and smell. Use nose drops several times a day if the cat is stuffed up and has mucus in her nose. Removing mucus helps the immune system that is trying to remove viruses, bacteria and toxins trapped in the mucus layer. Once the mucus is removed, the immune system can concentrate on removal of the cause. What you are doing is helping the immune system fight- that is always effective!

Antiviral drugs used in humans like acyclovir for herpes virus is not effective in cats.

Control of URI in kittens involves getting the maternal antibody protection high in the first eight weeks and giving the vaccine at seven and nine weeks to control the issue. A good game plan has made it possible to replace herpes virus carrier moms with daughters who have protection from the vaccine and are not carriers. Moms are then spayed and placed in a home away from the cattery to keep kittens herpes free.

The Importance of Vaccination

More than one herpes-free cattery has introduced the herpes virus when bringing in new stock. Just because the cats in a cattery are herpes free, don’t let vaccine immunity lapse. That will make all your cats susceptible. After the herpes virus is introduced, it often takes a year to get things settled down again.

Unvaccinated or poorly vaccinated queens have little immunity to herpes. The vaccine is insurance against the disease. If you need that insurance or are showing, protect your investment in genetics and time. Vaccinate your queens. Once retired and rehomed, the vaccine is less of an issue.

Low exposure and high maternally derived antibodies is a critical combination in preventing kittens from infection by a respiratory virus. The only way to get antibodies up in moms is to keep queens vaccinated for herpes and calicivirus once a year. We vaccinate to protect kittens, not mom! An annual HCP booster has proven to be enough to keep colostrum immunity high for kittens and prevent accidental virus introduction.